Sheermal or Shirmal is a saffron-flavored slightly sweet traditional leavened flatbread that is found in various countries on the Asian sub-continent including Iran, Bangladesh, Pakistan and India.

Sheermal is a Naan-like milk bread, apparently of Persian origins, and it is suggested that the name comes from the Persian word for milk which is “sheer”. In India, this “milk” bread is predominantly found in Muslim neighbourhoods (another reason to suppose it came to India with the Mughals) of Kashmir, Lucknow and Hyderabad.

My friend here in Sharjah had introduced me to "Sheermal", which we get from the bakeries.  Almost every other buiding in Sharjah has a bakery shop.  We get all the type of Rotis, like Pakistani Roti, Aghani Roti, Roghani Kulcha, Lachcha Paratha, Sheermal and many more. And out of these I buy only Sheermal from them.  I liked the mild sweetness in them.  So whenever I am craving for some mild sweet, I go down get a Sheermal.

We from the "We Knead to Bake" Group are baking Sheermal this month.  And today is the last day for the post so hurrying up.  I enjoy the "We Knead to Bake" Group.  Under the expert guidance of Aparna, I almost come near to what is expected. Made Sheermal at home for the first time and it came out very excellent the frist time itself. The home Sheermal tastes much much better than the bakery bought ones.

I followed the recipe given by Aparna exactly, except that I have increased the amount of sugar used. Otherwise the recipe remains same. 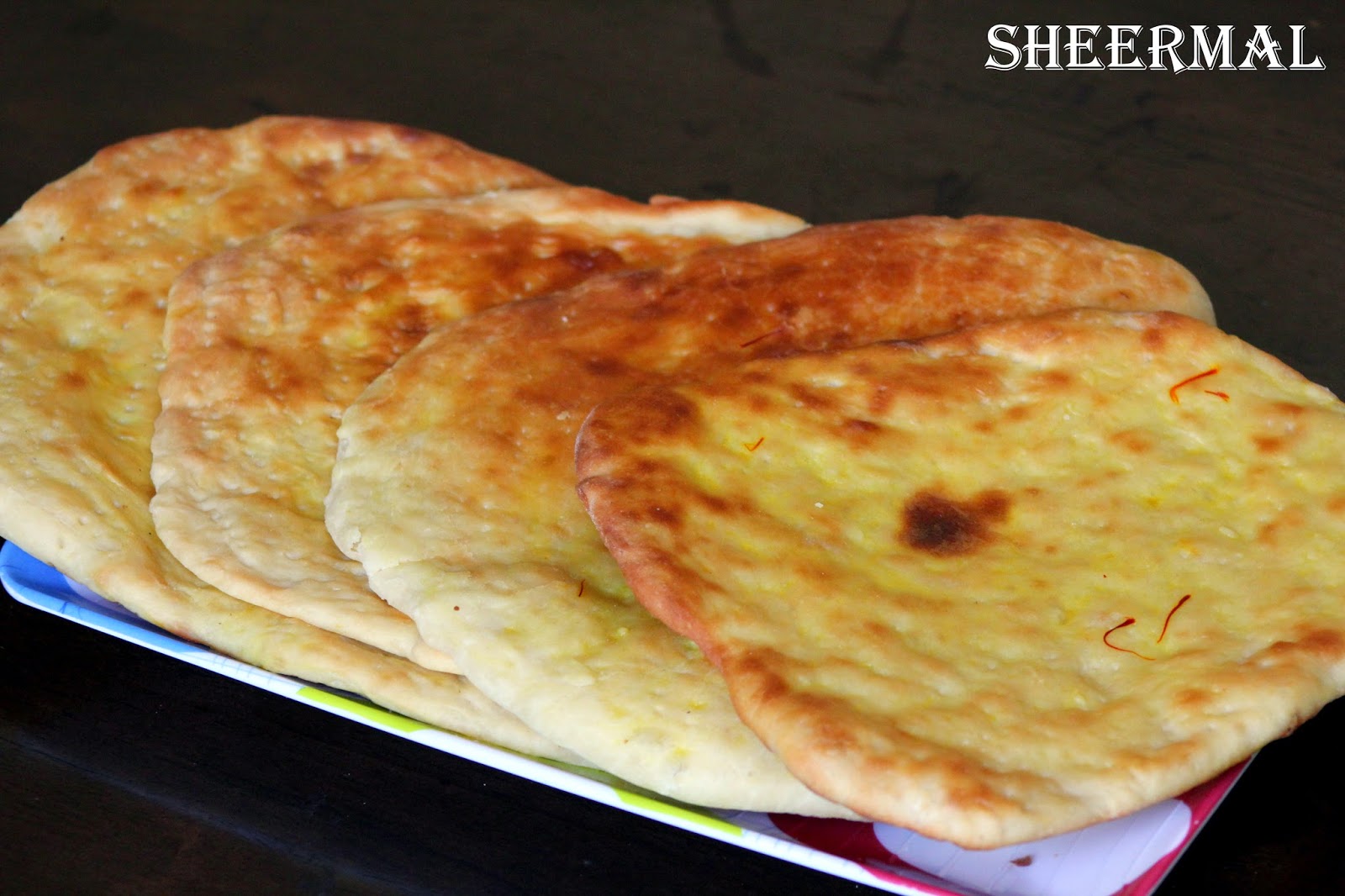 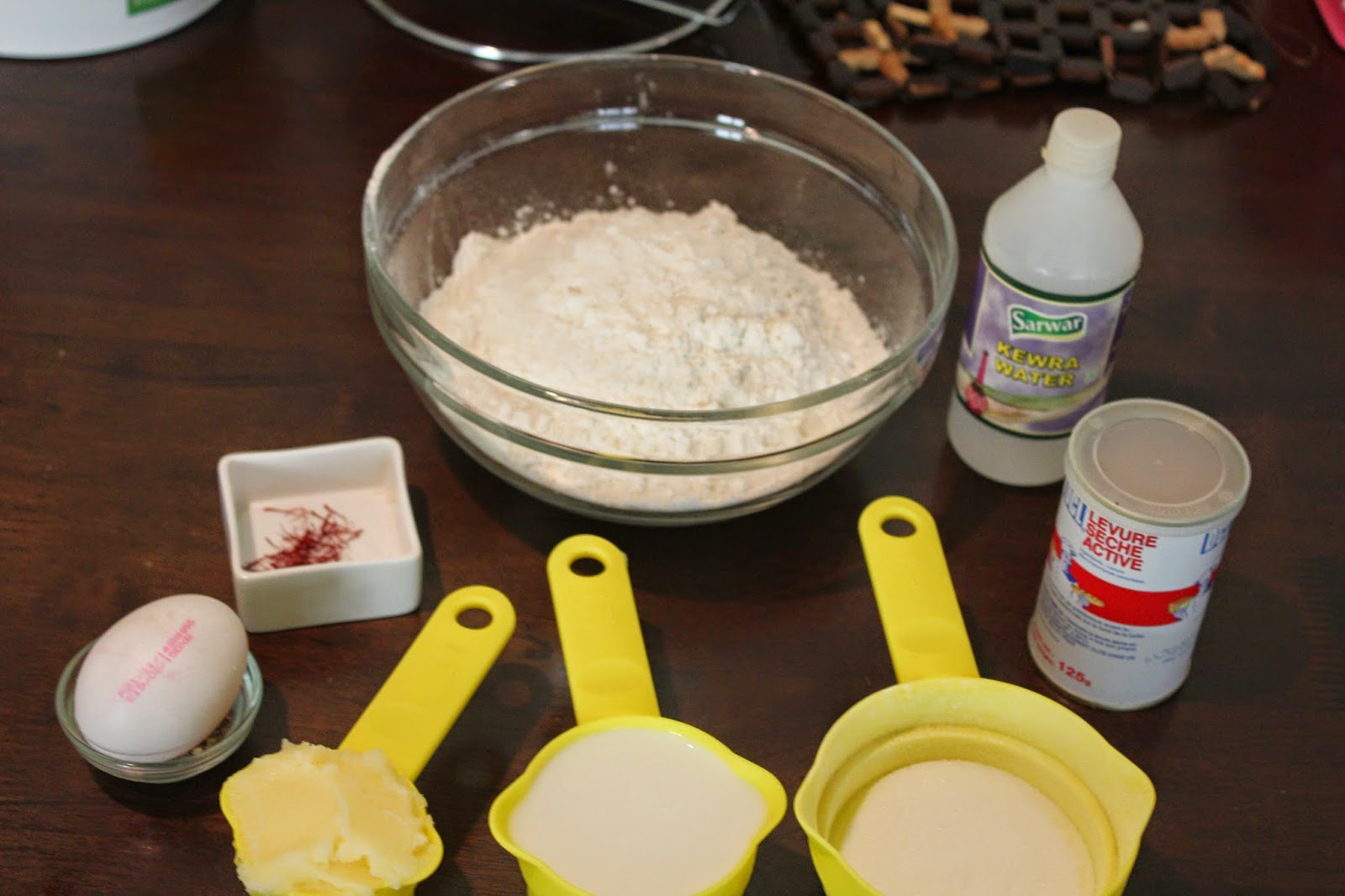 1)  Mix the yeast and sugar in luke warm water and allow it to froth for 5 to 10 minutes.  Keep it closed in a warm place.  Check it, if it doesn't froth up then repeat the step again with another t.sp of yeast.

2) Take the flour in a bowl, add salt, the yeast mixture, the remaining sugar, milk and the beaten agg. Mix together.  Add ghee in two lots and mix, till it forms a crumble.

3)  Now add the milk and kewra water and knead it into a soft and slightly sticky dough.  Transfer this to an oiled bowl, cover with a cling film and let it rest in a warm place for about 1 to 2 hours, till the volume is doubled.

4)  Remove the cling and push down the dough.  Knead again. 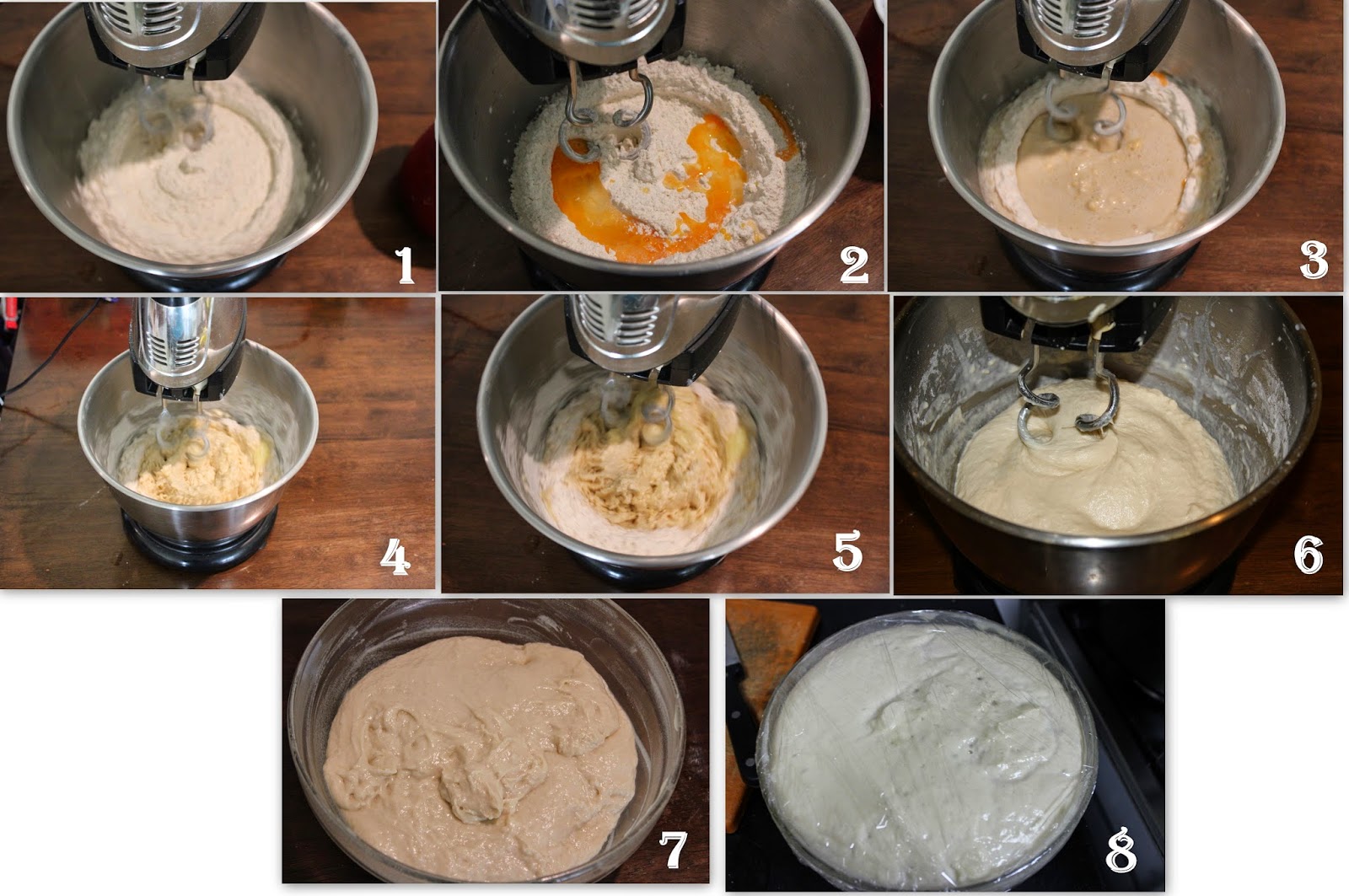 6)  Divide it into equal balls and lightly coat all over with a little ghee.  Cover and let it rest for about 10 to 15 min.

7) Now using your fingers and palms shape each ball to a roti shape.  Keep it little bit thick in size.  You can also use a rolling pin.

8) Place the rounds on a greased parchment baking tray and prick the rounds using a fork, almost through out the whole surface.  So that the air trapped in the dough is released and it will not rise much when it bakes. 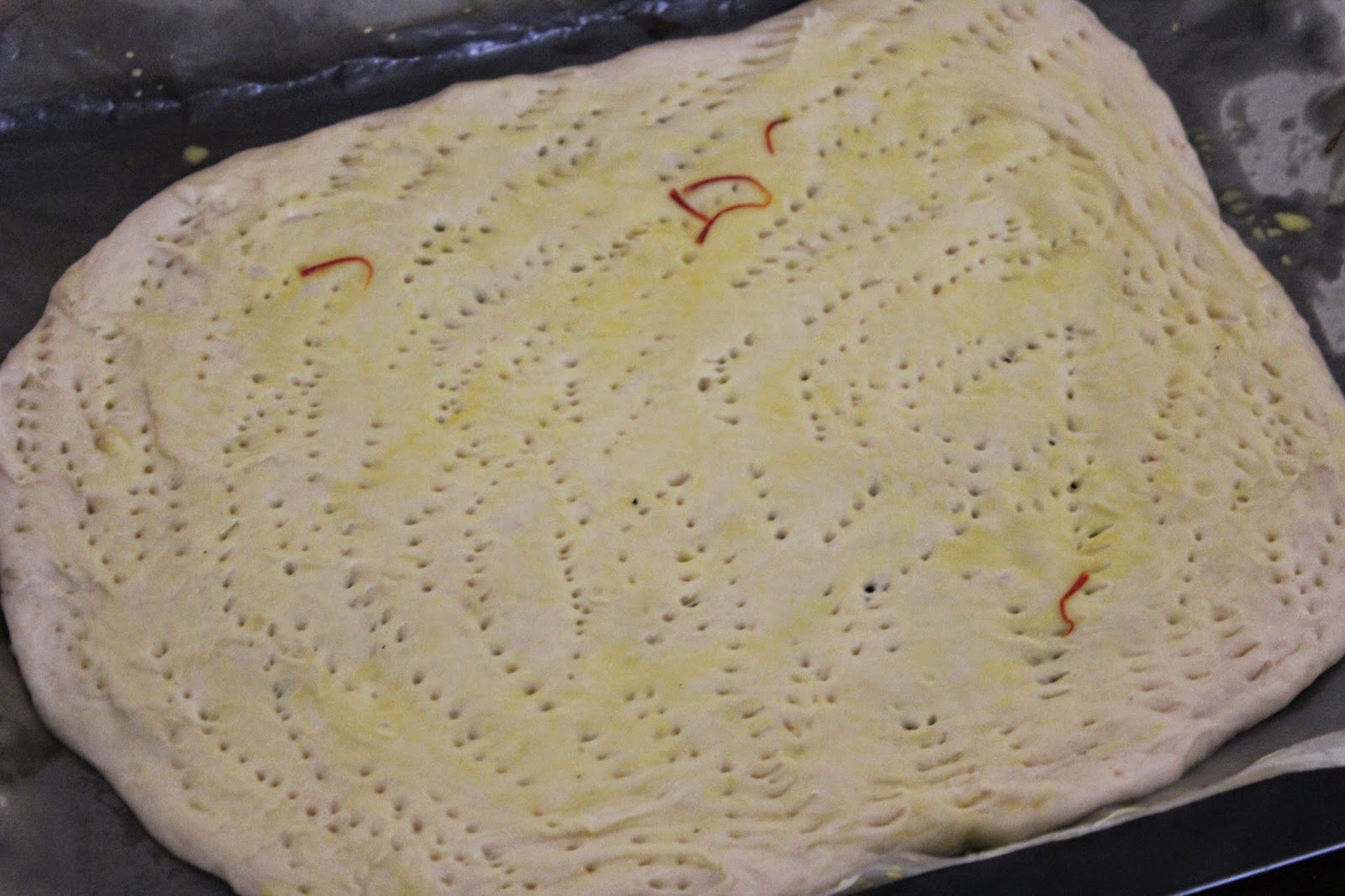 9) Brush generously with saffron-milk.  Bake in the middle rack for about 10 to 15 minutes, keep checking in between.  Once they turn to a lovely golden brown, remove them out.

10) Taken them out of the oven and immediately brush them with melted butter or ghee.  Serve warm. 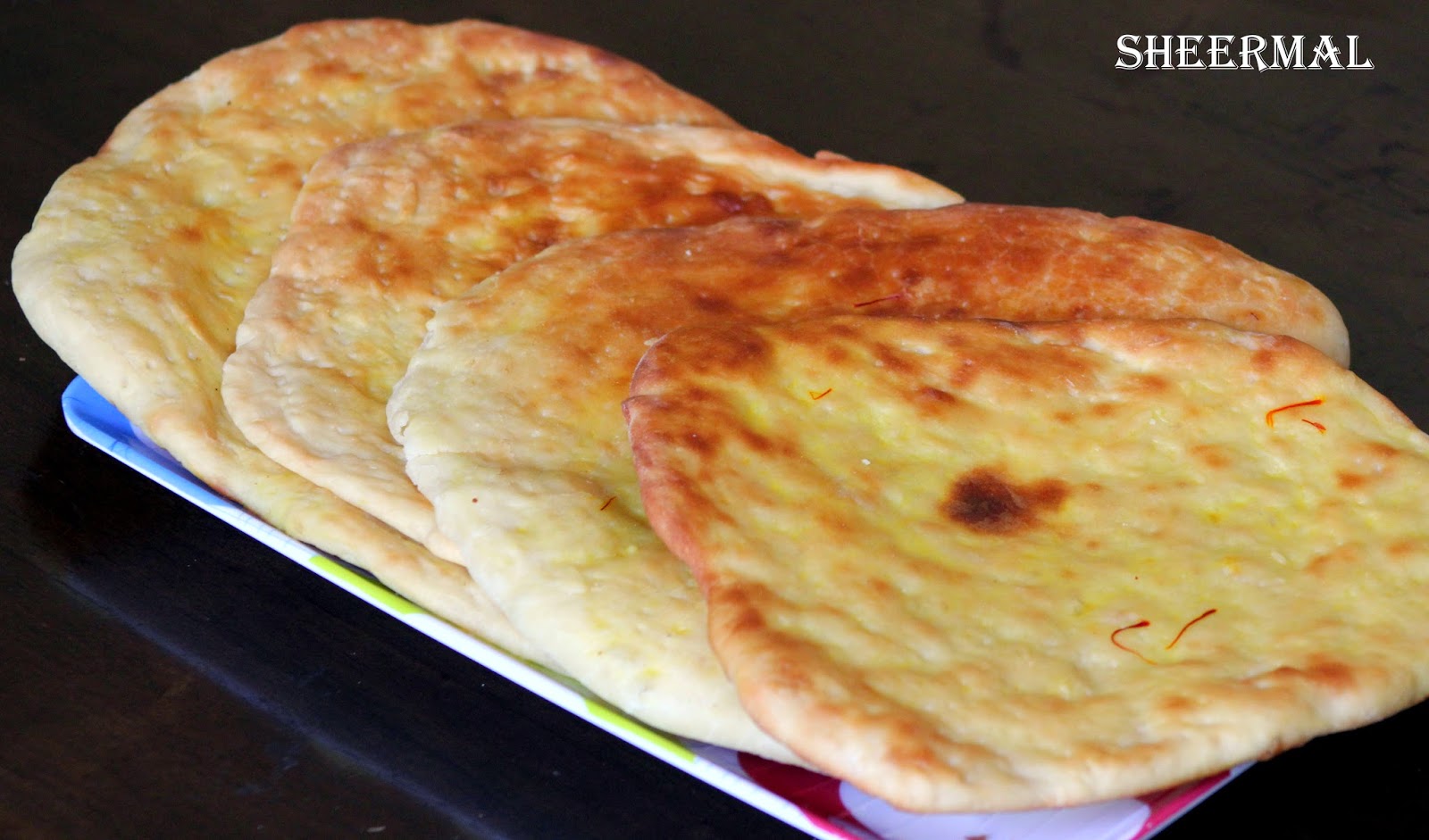 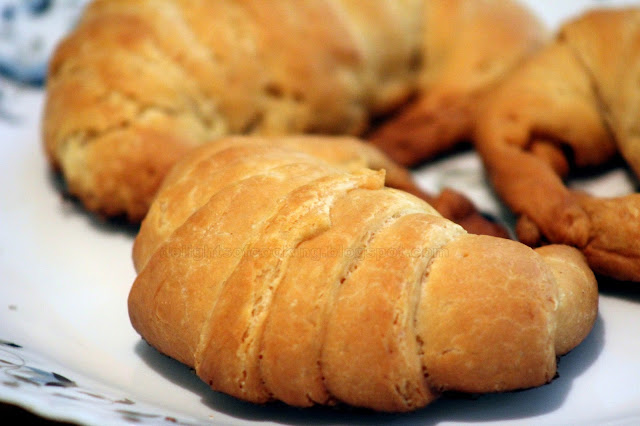